The ingenuity of the Hong Kong Protesters

2019 was the last year Hongkongers enjoyed the basic freedoms citizens of other countries take for granted. Throughout that year, protests took place against the Hong Kong government’s extradition bill which allowed political dissidents to be arrested and transferred to China for trial. Millions of people took part in demonstrations and thousands of people were arrested in the largest series of protests in the history of Hong Kong. Over the course of the summer, the protests turned increasingly violent.

On September 4th, Hong Kong’s Chief Executive, Carrie Lam, announced the bill would be officially withdrawn. But it was too late. Confrontation between the police and pro-democracy citizens, and between pro-democracy and pro-Beijing camps raged on. The city was deeply divided. Protesting became a daily routine for many citizens until January 23rd 2020, when Hong Kong had its first Covid-19 case.

Following the introduction of strict social distancing restrictions, brought in to curb the Covid-19 pandemic, the 2019–2020 Hong Kong Protests seemed to decline. Then, the draconian Hong Kong National Security Law passed on 30 June 2020, one hour before the 23rd anniversary of Hong Kong’s handover of sovereignty from Britain. This law criminalised any act of secession, subversion, terrorism, or collusion with foreign or external forces. It was promoted as a means of bringing stability but, in practice, it further diminished basic freedoms.

National security is a concern for all sovereign states and China is no exception. However, in the case of Hong Kong, the National Security law was passed entirely in Beijing without any consultation with the Hong Kong Legislative Council, and the text of the new legislation was only released after the legal document had come into effect.

To understand what the implementation of the National Security Law means for life in Hong Kong, I recommend the highly instructive documentary Hong Kong: Endgame, first broadcast on the Al Jazeera network in September 2021. It features interviews with multiple people across different sectors of Hong Kong society. One person interviewed is Hong Kong’s ‘father of democracy’, Martin Lee. He condemns the Hong Kong National Security Law as unconstitutional. He explains that according to the Basic Law, such sweeping legal changes ‘can only be passed by the Hong Kong legislature’. The new legal regime has received international castigation. Multiple countries, including the UK, US, Taiwan, Australia and Japan have loosened their immigration restrictions or granted refugee status to fleeing activists. 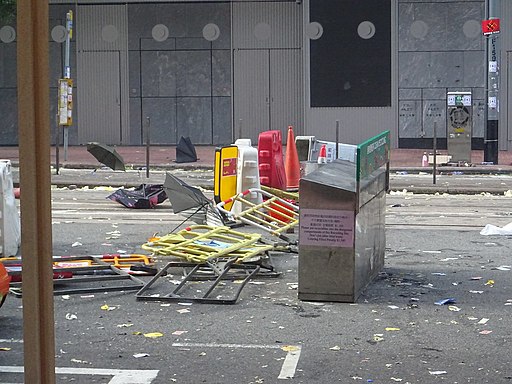 A pro-democracy movement re-emerged, with protesters fighting for the rights they had lost. Here, I will explore the unique nature of the tactics employed by this pro-democracy movement. As will be seen in the unfolding analysis, resistance is highly individualised. The word ‘individual’ is deliberately used here for the reason that the protest movement is, broadly speaking, ‘leaderless’. I use the word ‘activist’ to differentiate the radical protesters from the moderate ‘individuals’.

Pro-democracy individuals have sought novel ways to resist the implementation of the National Security Law. Their actions have been prompted by two events in particular: Hong Kong was removed from the Heritage Foundation’s Index of Economic Freedom in 2021 due to the increasing ‘control of Beijing’; and Chief Executive Carrie Lam broke her promise not to interfere with the freedom of the press if the media guaranteed not to commit security offences.

The rise of economic resistance

One unique method of resistance to emerge has been in the economic sphere. The ‘yellow economic circle’ is a coding system that arose in the early stages of the protests. This is an informal system that rates a business’s political stance. Businesses in favour of the pro-democracy movement are labelled ‘yellow’ whereas pro-establishment businesses or supporters of the Hong Kong Police Force and the authorities are labelled ‘blue’.

Local scholars Debby Sze Wan Chan and Ngai Pun have described this as a form of ‘grassroots resistance’. Even though their article was written before the Covid-19 pandemic and law enforcement crackdown, they showed how, for the first time in the territory, local pro-democracy activists combined street protest with consumer activism. Some of the ‘yellow businesses’ offered free meals for teenage protesters who were experiencing hardship, or set up a ‘Lennon Wall’ (a mosaic wall made with memo pads) and played pro-democracy anthems inside their boutiques. Others announced that all their bikes around the Chinese University of Hong Kong would be unlocked, due to a ‘system breakdown’, when the campus was besieged.

‘Yellow businesses’ often became a target of the authorities; they were typically accused of improperly following anti-Covid-19 measures. A well-known ‘yellow business’ chain Lung Mun Café, announced it would drop its outward political affiliations after months of being targeted by the governement. According to an estimate by Professor Simon Shen, the ‘yellow economic circle’ market exceeded 100 million HKD (9.5 million GBP). Despite other scholars claiming that that the circle would not severely impact the economy as a whole, the Fulum Group Holdings, a pro-establishment major local restaurant chain, announced the permanent closure of 20 of its 78 restaurants in February 2020 after an employee contracted Covid-19. Furthermore, another major chain and ‘blue business’, the Maxim’s Caterers, admitted that they had difficulty in recruiting staff. Indeed, while the ‘yellow businesses’ may encounter political oppression, the ‘blue’ ones could suffer severe loss of revenue. 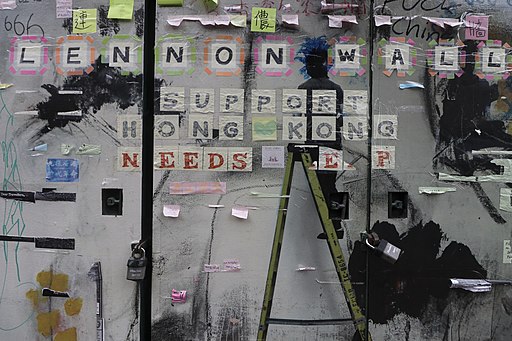 With the enforcement of National Security Law, a certain proportion of ‘yellow businesses’ dropped their political affiliations due to fears of persecution. Others remained, but felt compelled to remove pro-democracy posters and ‘Lennon Walls’. As Freda Forrest argues, spending within the ‘yellow economic circle’ had become the only way to fight for freedom. For instance, the owner of the ‘yellow’ chain grocery store AbouThai was charged under the National Security Law. As an act of resistance, pro-democracy individuals subsequently queued for hours outside AbouThai to buy everything in the store, even spending unnecessarily simply to show support.

The Labour Day Golden Week, a long weekend in Mainland China, is traditionally a time when Hong Kong is flooded with mainlanders. However, with all but three borders in the territory having been closed since February 2020, the Golden Weeks in 2020 and 2021 saw pro-democracy individuals queuing for ‘yellow businesses’ while the ‘blue’ ones remained quiet.

Multiple websites and apps that helped to differentiate businesses by political affiliation emerged. Scanning the Covid-19 tracking app for dine-in services became mandatory in Hong Kong and the pro-democracy camp saw this as a violation of freedom. In response, some ‘yellow businesses’ protested by opening their restaurants as usual but only providing a takeaway service, despite the fact that forfeiting their dine-in service would result in a sharp decline in revenue.

Hong Kong scored a record low in Reporters Without Borders’ Press Freedom Index following the implementation of the National Security Law. The Hong Kong Free Press provided a thorough chronological map of the erosion of freedom of the press. In response, the same colour-coding system of resistance was applied to different sectors of the media.

In August 2020, Jimmy Lai, founder of Hong Kong’s largest pro-democracy newspaper Apple Daily, was arrested on suspicion of collusion with foreign forces under the National Security Law, while hundreds of police officers raided the publishing house. This act received widespread criticism. NGOs such as Amnesty International deemed that the law threatened the freedom of the press, while the US Consulate General in Hong Kong and Macau published a statement arguing that the law would lead to self-censorship among citizens. But the pro-democracy individuals who were prevented from protesting on the streets after the authorities ruled the slogan ‘Liberate Hong Kong’ illegal, found a way to fight back: people rushed to buy Apple Daily stocks, which consequently experienced a 1100% flash spike; others lined up in front of newspaper stands and convenience stores at 2am just to get a copy of the paper, with some asserting they would continue to do this even if Apple Daily published a pile of ‘blank sheets’.

Despite Jimmy Lai’s resignation from his position as the chairman of Next Digital Limited, the parent company of Apple Daily, sanctions on both him and the publishing house continued. In May 2021, the authorities froze Jimmy Lai’s assets including his shares in Next Digital Limited. Security Secretary John Lee claimed that this action had no impact on press freedom. In June 2021, over 500 police officers raided Apple Daily, and this time the government froze the company’s assets, expecting it to shut down within a week.

It was raining when pro-democracy individuals again queued into the middle of the night for Apple Daily on 24 June, only this time for its final edition. People also bought the final edition after waiting hours in line at Apple Daily’s headquarters to thank the staff who defended the fourth estate until the last minute. The Guardian called it a ‘painful farewell’. Again, pro-democracy individuals did not just let the paper go: before its website went offline, netizens raced to archive as much content as possible. This is still available on various platforms.

The implementation of the National Security Law means that the range of methods of resistance available to protesters has been narrowing. 2021 saw multiple ‘yellow economic circle’ apps and platforms taken down, and many ‘yellow businesses’ dropped their political affiliations or even closed down. The Apple Daily was not the only case of its kind. The same formula was applied to one of the last and largest pro-democracy news agencies, Stand News, just a few days before the year ended.

So far, 2022 has not been a good year for most Hong Kongers, regardless of their political standpoint. The fifth wave of Covid-19 struck the already-fatigued city after Lunar New Year on 1 February, with a record high of 76,991 daily confirmed cases at its peak on March 3rd. Since the introduction of vaccine pass laws on February 24th, unjabbed individuals are barred from entering shopping malls, supermarkets, and markets. Despite this, resistance finds a way. Street-level shops and convenience stores are not regulated by vaccine pass laws. AbouThai is usually located in shopping malls but in March it announced an expansion of its business via a street-level convenience store model under franchisees. Hope has always remained.

As can be seen in the way AbouThai is transforming its business, even in the hardest of times, resistance is adaptive. In Hong Kong, as Milan Ismangil and Maggy Lee suggest, resistance has become almost ‘habitual’. It is true that the future of the protest movement is uncertain, but pro-democracy resistance will rage on. As the last scene of the Al Jazeera documentary, intimated: ‘even dying in prison, so what?’ said Martin Lee, 83, who spent the New Year in jail amongst many other activists.

C.L. Cheang is a MA student at King’s College London and a Hong Konger by choice.