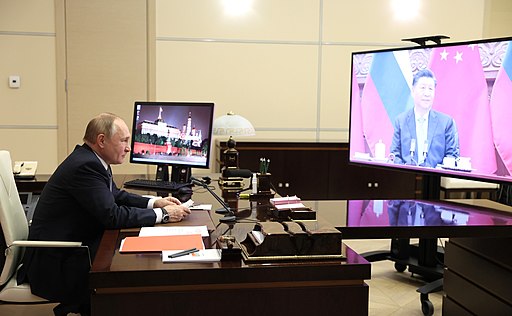 The legacy of Hitler’s favoured ideologue lives on.

Vladimir Putin and Xi Jinping have been inspired by the same political philosopher, writes Rowan Callick.

This intimacy is driven by more than a shared common-cause. They also share a common muse – and, promisingly for those who favour freedom and democracy – it is a muse who promoted an ideology that failed disastrously in the first half of the 20th century.

The worldviews of the coteries of Putin and Xi are driven significantly by the same resurgent thinker: the German political philosopher Carl Schmitt. Schmitt was the Crown Jurist of Adolf Hitler’s National Socialist Party, which he joined and helped guide. Born in Prussia in 1888, Schmitt elevated the primacy of the state to a theological level and detested representative democracy, liberalism and the rule of law. He would have applauded the invasion of Ukraine, and supported the seizure by Beijing of Taiwan.

One of the most influential Russian figures to have urged Putin’s invasion of Ukraine is Aleksandr Dugin, a leading member of Putin’s United Russia Party. Dugin is the author of Foundations of Geopolitics which has, on Putin’s insistence, become an official text book of the Russian military’s General Staff Academy. Dugin has been deeply influenced by Schmitt. Indeed, he has written a much-cited essay: Carl Schmitt’s Five Lessons for Russia.

Schmitt believed that the world’s future lay in the hands of ‘large geopolitical entities, each of which should be governed by a flexible super state’ – justifying their seizing more lebensraum, living space needed for a state’s ‘natural development.’ Like Russia needing Ukraine.

In China, leading academics have become infected with ‘Schmitt Fever’. Hundreds of approving papers have been written about the Nazi thinker. His influence is clear on Wang Huning, who is now, alongside Xi Jinping, one of the seven members of China’s Politburo Standing Committee, and who has played a leading role – if not the leading role – in steering Chinese Communist Party thinking for the last 20 years.

Ryan Mitchell, assistant law professor at the Chinese University of Hong Kong, has written that China’s era of economic reforms, launched by Deng Xiaoping while the state retained ‘dictatorial powers as to political matters’, fitted more neatly within Schmitt’s framework of the strong state than that of classic Marxist thought. Mitchell added: ‘The course that China has taken during Wang Huning’s rise to theoretical prominence has often echoed this model.’

Schmitt backed Hitler’s suspension of democracy and the Nazis’ burning of books by Jewish authors. Hermann Goering appointed him to the Prussian State Council and he became president of the Association of National Socialist German Jurists and editor-in-chief of the Nazi newspaper for lawyers, in which he championed the political assassinations of the ‘Night of the Long Knives.’ He never recanted following the war.

Schmitt opposed what he viewed as liberal values, including the separation of powers, and asserted that democracy should only be viewed as truly legitimate when it worked through acclamation, through group voices being raised at, for instance, public rallies, and not through ballot box elections. He viewed liberalism and his version of democracy as incompatible, and disdained cosmopolitanism.

A state of exception

Whoever held sovereign power and identified a danger to their state’s existence, Schmitt wrote, could declare a ‘state of exception’ exempting them from restraint by the rule of law. Politics, including party ideology, he asserted, must be privileged over all other areas of life including the economy, and must identify groups of people as either friends or enemies, proclaiming approvingly as the Nazis took power that ‘the idea of ethnic identity will pervade and dominate all our public law’ to ensure ‘cultural security’.

Schmitt’s international theory, echoed by others, was dominated by his view of Eurasia as the central fulcrum of world power, a concept that fits naturally with Russian thinking but is also increasingly attractive in China, taking in concepts like the Silk Road, and the role of the Mongolian Empire as an Asian archetype for global power, of which Beijing covets its own version including through its Belt and Road Initiative.

In contrast, the power of the USA, Britain and their allies is viewed as deriving chiefly from maritime strength, which is associated with liberalism and open trade, which Schmitt’s thinking denigrates – a view reinforced by the manner of the US departure from Afghanistan.

Schmitt’s views have regained traction internationally over the last 25 years – including within the West and with the ascendancy in academe of ‘Critical Studies’ and of ‘post-colonial’ antipathy to liberalism. His positions have been espoused especially eagerly by new-generation power elites, champions of autocracy, in Russia and China. It would however be wrong to conclude that despite the extent of the Schmitt imprint on thinkers in both countries, they align on everything. The Russian and Chinese political regimes have many obvious differences.

While Putin’s party would probably crumble without its leader, the Chinese Communist Party retains massive and sustainable power. Xi, for all his manifest authority, remains a sincerely devout servant of his party, and needs to ensure it backs him fully, especially this year as he needs its five-yearly congress to reappoint him as general secretary by acclaim. A war, even one halfway across the world, is not helpful for the stability Xi needs for his smooth reappointment in November. Nor is the economic disruption resulting from the Ukraine invasion and the sanctions.

The economies of China and Russia contrast strikingly. China’s economy is now ten times the size of Russia’s, with even its per person Gross Domestic Product larger. China is economically enmeshed with every country in the world, while Russia’s global engagement hinges overwhelmingly and narrowly off energy and defence exports.

Although many commentators have said that only Xi has the standing with his friend Putin to intercede for peace, he almost certainly won’t do so. The same was said amidst the international angst over the successful push of North Korea, China’s only formal ally, towards becoming nuclear armed. However, Xi refrained from intervening with Kim Jong-un. Nor will Xi walk away from the 5,000 word ‘no limits’ pact that he signed with Putin at the start of the Winter Olympics.

This agreement reads like a Beijing-drafted document. Its overall thrust aligns with Schmitt’s statist theology and belief in the centrality of ‘Eurasia,’ insisting on ‘the protection of (Russia and China’s) core interests, state sovereignty and territorial integrity, and opposition to interference by external forces,’ including such forces’ attempts ‘to undermine security and stability in their common adjacent regions.’ This might be interpreted as attacking NATO involvement in Ukraine, or Quad support for Taiwan.

In Russia, others besides Dugin who are influential with Putin’s circle also promote Schmitt’s worldview, including the New Conservatives led by 43 year-old political scientist and strategist Mikhail Remizov. In China, the embrace by Xi’s circle of ‘New Left’ thinkers formerly held at arm’s length, has accelerated the surge in Schmitt’s influence and the elevation of ‘national security’ as a key policy driver.

The blaming on ‘foreign forces’ of young Hong Kongers’ now-crushed campaign for democracy, and the imposition of the all-encompassing National Security Law, are perceived as classic takes from the ‘neo-authoritarian’ Schmitt playbook, promoted by Peking University law professor Chen Duanhong.

Chen’s colleague and fellow Schmittian, Jiang Shigong, attacking the ‘colour revolutions’ that scared the CCP, said: ‘If you do not submit to political authority, then if I say you’re wrong, you’re wrong, even if you’re right.’ He praised ‘Xi Jinping Thought’ for ‘perfecting the party’s leadership of the state.’

Griffith University government and international relations professor Haig Patapan has explained that Schmitt is helping frame the CCP’s legitimacy around nationalism and external enemies rather than class struggle – which is no longer available since party members themselves have become palpably China’s privileged elite.

Schmitt envisaged an anti-Western, anti-liberal world order of ‘great spaces,’ spheres of influence, controlled by great powers. Thus ‘Schmitt Thought’ is playing a crucial role in both helping the authoritarian instincts of the Russian and Chinese regimes cohere conceptually, and also anchoring their crucial mutual connection.

The East is rising

China’s Foreign Minister Wang Yi underlined this in stressing 10 days after Putin launched the Ukraine invasion: ‘The China-Russia relationship is grounded in a clear logic of history and driven by strong internal dynamics.’ Their connection is ‘rock solid’, Wang said. One might almost say ‘Schmitt-solid’.

Back in the late 1930s, the dictatorships of Germany, Italy, Russia, and of other lesser states whose levers of power had also been seized by preening elites, appeared to many even beyond their borders to be pioneering the way the whole world was heading, just as Xi states today: ‘The West is declining, the East is rising.’

Xi Jinping, bathed in the warm glow of triumphant historical determinism following the Chinese Communist Party’s centenary last year, also said: ‘In today’s world, if you want to say which political party, which country, and which nation can be confident, then the Communist Party of China, the People’s Republic of China, and the Chinese nation have the most reason to be confident!’

Might the resistance of Ukraine under its charismatic, freedom-loving President Volodymyr Zelensky and its modelling of the alternative to the strident march of the 21st century dictators, be starting to cause a crack or two to be opening in the confidence of the latter, in their golden lairs in the Kremlin and in Zhongnanhai?

Schmitt was proven wrong the first time around. Might it have been mistaken to revive his corpus of authoritarian ideology for a second spin?

Rowan Callick has worked as China Correspondent and Asia-Pacific Editor for Australia’s two national newspapers. He has written three books on contemporary China, published in both English and Chinese, his most recent is The Party Forever.