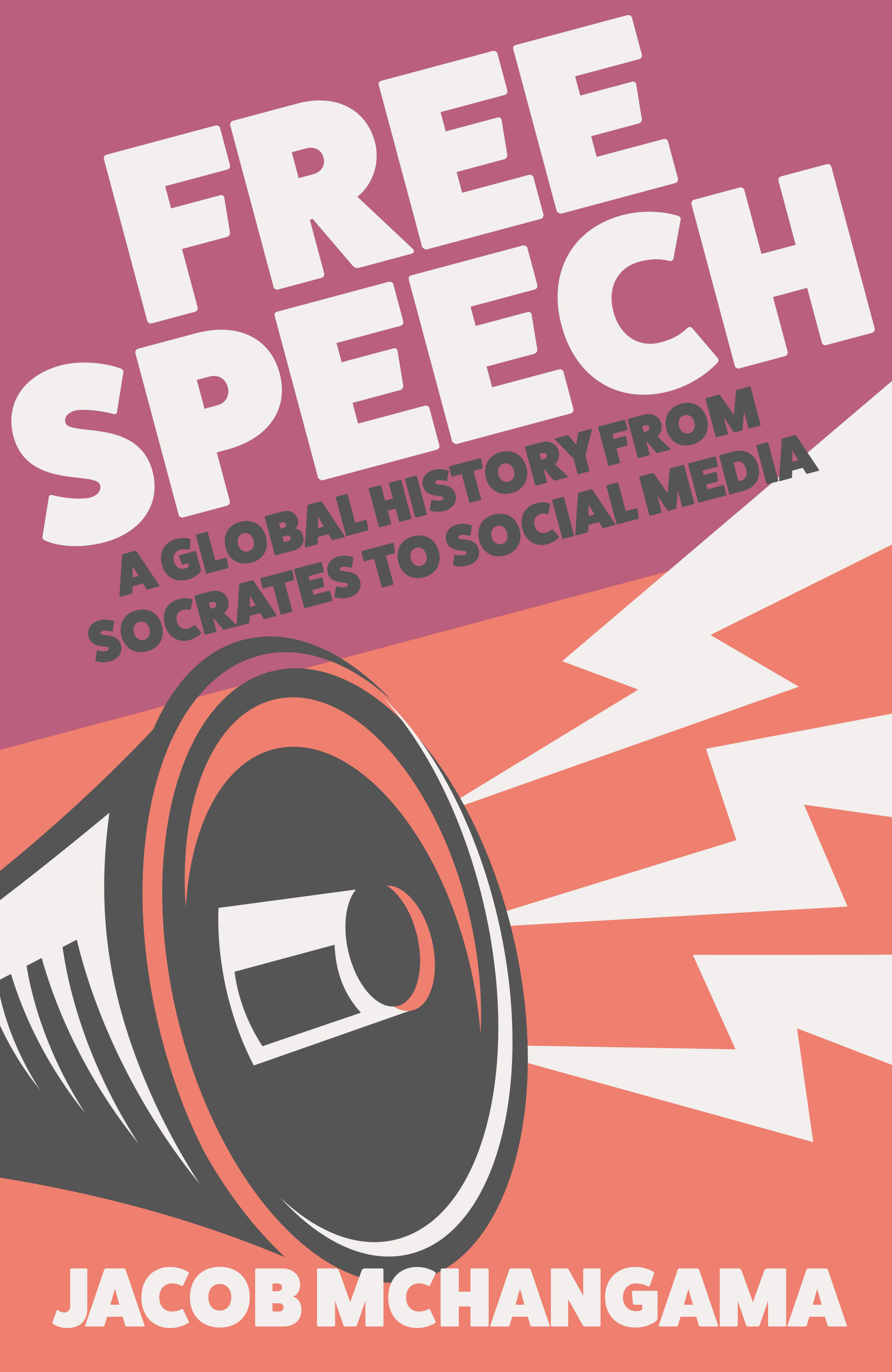 Free Speech: A global history from Socrates to Social Media

History has useful lessons to offer in the ongoing fight for free speech, writes Joanna Williams.

Free Speech A global history from Socrates to Social Media, Jacob Mchangama’s compelling global history of free speech, tells the story of man’s ongoing struggle for the most fundamental of all rights. But it also does far more than this: it tells of humanity’s progress through battles for freedom, equality and democracy. It covers scientific developments – the invention of the printing press and the internet – and moments of social and political upheaval from the Reformation and the Enlightenment to the French Revolution and the Civil Rights Movement. It reveals how the struggle for free speech has shaped the world as we know it.

Although the title of Mchangama’s book is Free Speech, he also tells the history of censorship. He details the movements and arguments that have been used repeatedly to justify suppressing speech. The sheer length of this book provides a stark indication of the weight of censorship. The same arguments, even the same metaphors, recur again and again.

Mchangama tells us that five centuries ago, the philosopher and author Thomas More described Protestant writings as ‘a highly infectious disease’, warning that ‘pestiferous’ books were ‘sent to this realm to pervert the people from the true faith of Christ.’ Today, there are frequent calls for social media censorship to tackle the ‘pandemic of misinformation’ that, a House of Lords Committee recently argued, causes harm ‘to individuals, wider society and our democratic processes’.

Similarly, we see that censorship repeatedly occurs through social shaming as much as through legal prohibitions. Mchangama reminds us that the Inquisition relied upon humiliating and shameful punishments more than mass torture and burnings. As the social cost of unorthodox speech skyrocketed, the quest to eradicate heresy shaped Western Europe into a ‘persecuting society’. Modern day heretics such as Kate Clanchy, J. K. Rowling or Kathleen Stock may well consider the persecuting society to be alive and well today.

Mchangama tells us that in the US, the clash over the Sedition Act of 1798 ‘respresented a deeper clash between an elitist and an egalitarian concept of free speech’ that ‘has been a recurrent theme since antiquity.’ The argument that free speech must be restricted to guard against offence – be it blasphemy or heresy or hate speech – sits comfortably alongside the notion that free speech is the preserve of a privileged few. In the UK, in 1898 it became a criminal offence to promote ‘feelings of enmity or hatred between different classes of Her Majesty’s subjects.’ This early hate speech law makes clear how protecting the feelings of a minority becomes an explicitly political act.

The political nature of censorship is obvious at every turn. In 1917, we learn, ‘the trustees of Columbia University dismissed two professors for their antiwar opinions.’ We can perhaps compare this with the current UK education secretary’s promise to ‘crack down’ on lecturers who express sympathy with Putin. Today’s ‘crack down’ is mooted at the same moment the government is trying to get a Higher Education Free Speech Bill through Parliament.

Free Speech makes clear the regressive consequences of censorship. Justinian I, ruler of the Byzantine Empire from 527 to 565, closed what had been Plato’s Academy in Athens in a bid to ‘purge the empire of pagan ideas’. In 538, he instituted the death penalty for blasphemy. Mchangama shows how ‘systematic banning, censorship, as well as destruction and neglect of pagan texts and places of worship’ had ‘grim consequences for the furtherance and development of knowledge, philosophy and science.’ But he also makes clear that it wasn’t just book burnings that accounted for lost literary texts, ‘most were destroyed by neglect and the closed-mindedness bred by the dogmatic climate.’

Into the twentieth century, Mchangama challenges the growing misconception that Hitler’s rise to power would not have occurred if there had been more, or better, restrictions on free speech. In contrast, we learn, ‘The continued popularity of Adolf Hitler and his fierce propaganda saw most German states prohibit him from speaking publicly between 1925 and 1927.’ But this ban, Hitler concluded, worked to his benefit, boosting his fame and popularity. And no sooner had Hitler been sworn in than he ‘took aim at free speech’ by enforcing bans on newspapers.

When set out comprehensively, the history of the fight for free speech appears like an elaborate game of whack-a-mole. Every time one argument for censorship is beaten down, another one appears. But what Mchangama’s does so successfully is to make clear why this endless struggle is so important. He shows how extensions in free speech lie behind every genuinely progressive social and political change. Right from the time of Gutenberg: ‘New ideas spread by printing presses called into question the very assumptions about knowledge, religion, and authority upon which the social order of Europe was based.’

Whether it’s the Enlightenment, the English, American or French revolutions, the end of slavery, end of Apartheid or the Arab Spring, in each case, the years that preceded these tumultuous events were marked by advances in free speech. ‘There is a clear correlation between the waxing and waning of democracy and freedom of speech and the press.’

For this reason, far from what today’s activists would have us believe, free speech does not hand more power to the already privileged. The exact opposite is the case. As ‘the first target of authoritarians who intend to subvert democracy’, free speech has always posed a threat to the status quo. Those who have most to fear from free speech are those in positions of power.

The sheer length of Mchangama’s book is a sobering reminder that the fight for free speech is never won. There are always new threats. The Online Safety Bill currently making its way through the Houses of Parliament risks handing unprecedented censorious powers to Big Tech companies and reducing us all to the status of children in the process.

Free Speech is an inspiring book. It reminds us of brave figures who battled against censorious laws and restrictions: whether that’s Rosa Luxemburg who argued that ‘freedom is always and exclusively freedom for one who thinks differently’ or Frederick Douglass who proclaimed, ‘a man’s right to speak does not depend upon where he was born or upon his colour. The simple quality of manhood is the solid basis of the right – and there let it rest forever.’ Machiavelli longed to ‘see that golden age’ restored in which ‘everyone could hold and defend whatever opinion he pleased’. Milton demanded ‘the liberty to know, to utter and to argue freely according to conscience, above all liberties.’ While to Voltaire, the solution to offensive material was straightforward: ‘Does a book displease you? Refute it. Does it tire you? Read it not.’

The time is right for a new generation of free speech heroes to build on their inspiring legacy and turn the tide on a culture that holds liberty in contempt. Mchangama cites the twentieth-century judge and scholar Learned Hand: ‘Liberty lies in the hearts of men and women; when it dies there, no constitution, no law, no court can even do much to help it. While it lies there it needs no constitution, no law, no court, to save it.’ Mchangama’s Free Speech is a vital contribution to liberty’s revival.

Free Speech: A Global History from Socrates to Social Media by Jacob Mchangama is published by Basic Books and can be purchased here.

Joanna Williams is the Director of Cieo. Her latest book, How Woke Won, will be published in May.